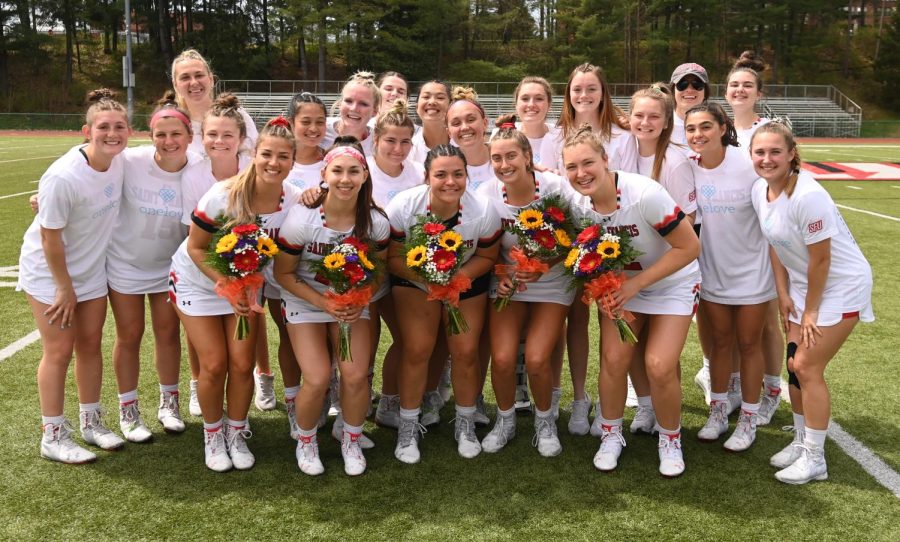 Prior to its Senior Day Game on April 23 at DeGol Field, the lacrosse team hosted a “One Love” event to raise awareness of those struggling in harmful and abusive relationships.

Before the game, a walk and tailgate were conducted to honor those lost to abusive relationships, as well as those currently suffering in them.

The One Love Foundation was founded in honor of Yeardley Love.

Love, a native of Cockeysville, Maryland, enrolled at the University of Virginia where she competed on the Cavaliers women’s lacrosse team. In May 2010 – just weeks before she was to graduate from UVA – she was killed.

Her on-again, off-again boyfriend was convicted of second-degree murder.

Following her death, Love’s family started the One Love Foundation in her honor. One Love works to educate young people about the difference between healthy and unhealthy relationships, and to encourage people to seek help before a relationship escalates to violence.

Since it was launched, One Love has helped many young adults navigate both healthy and unhealthy relationships.

“Now thousands of college students have been educated on how to love better by recognizing the signs of an unhealthy relationship.

“One Love has changed the conversation for the betterment of all of us.”

Prior to last Saturday’s One Love event at SFU, Student Athlete Mentors (SAMs) at the University completed a course that explored how someone should approach and address a harmful relationship.

Once the SAMs completed the course, they educated their teammates on the subject.

“I thought this initiative was a good first step,” said junior Erika Ellison, a student-athlete mentor and member of the lacrosse team.

In the Senior Day Game against Central Connecticut State that followed the One Love event, SFU posted an 18-14 victory over the Blue Devils.