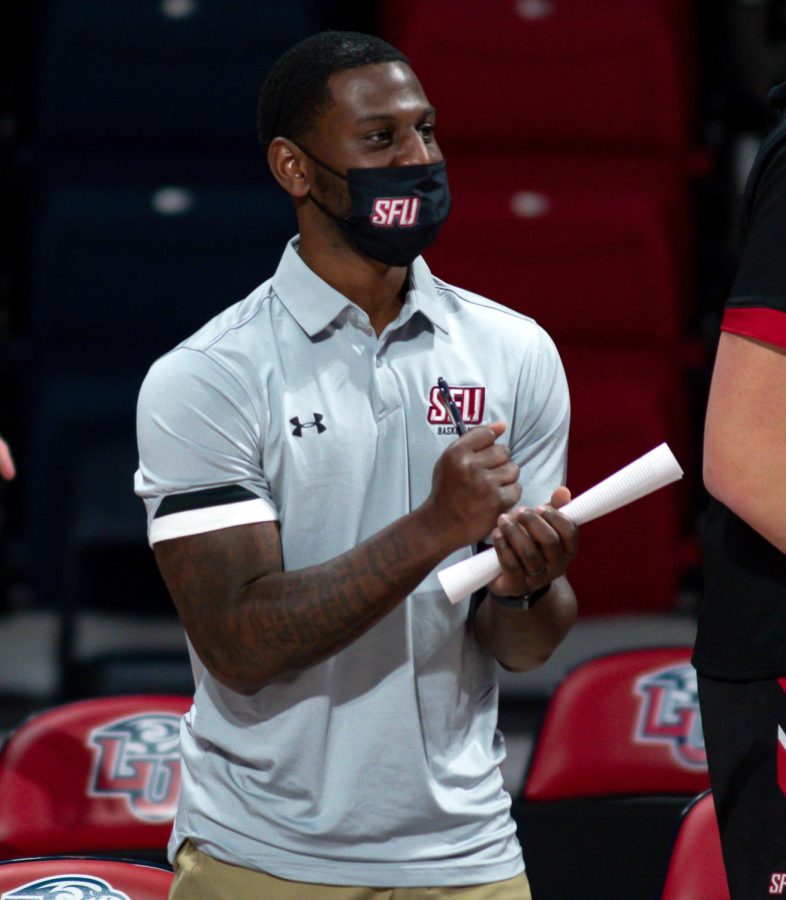 Former Red Flash men’s basketball player and assistant coach Umar Shannon (above) recently completed his first season as an assistant coach at Saint Peters College, and his timing on joining head coach Shaheen Holloway’s staff was about as good as it gets.

Saint Peters became the first No. 15 seed in the NCAA Tournament’s history to advance to the Elite Eight in “March Madness,” defeating Kentucky, Murray State and Purdue before falling to eventual runner-up North Carolina.

Krimmel said that when Shannon – a 2013 SFU graduate – was on his staff from 2016-21, his ability to connect with his players was remarkable.

“He was a very good recruiter and could really understand a player mentally,” said Krimmel. “A lot of that comes from the fact that he played here and was actually in the locker room.”

A native of Atlantic City, New Jersey, Shannon averaged 15.8 points per game during his junior season at Saint Francis in 2010-11. He scored 26 points at VCU in the season-opener of his senior year, but injured his knee against the Rams and missed the remainder of the 2011-12 season.

He then played a graduate-transfer year at Quinnipiac in 2012-13, averaging 14.3 ppg for the Bobcats. Shannon finished his three-year playing career at SFU with 936 points.

Krimmel said he talked to Shannon shortly after the Peacocks’ magical run ended and that his former assistant was very excited.

“Obviously it’s tough when you lose your last game of the season, but overall he was ecstatic about the run.”

Krimmel also noted that what Saint Peter’s did last month should serve as motivation for his team and other small Division I schools.

“When you see teams like that go on a run, which is becoming much more common nowadays, it is just a reminder of how far a small school like Saint Francis can go.

Krimmel said he believes the current college basketball landscape increases the likelihood of future runs similar to the one made by Saint Peter’s.

“The one-and-done rule makes it so that a lot of these bigger schools don’t have the same team camaraderie that smaller schools do.”