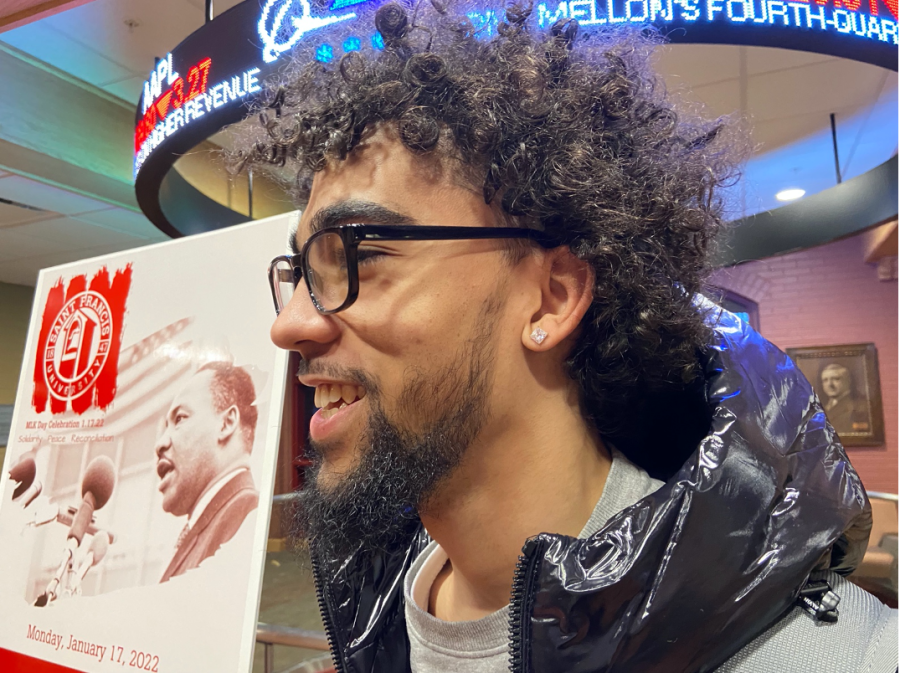 Activities within the School of STEAM included a virtual discussion of “The Letter from the Birmingham Jail,” led by Associate Professor of Philosophy Grant Julin; a discussion of the documentary “George Washington Carver – An Uncommon Life,” led by Biology Instructor Andrew Scanlan; and a panel titled “Student Voices Raising Public Awareness,” led by Associate Professor of English Brennan Thomas and Honors Program students Monica Gregg, Alexandra Ochs and Madison Soellner.

More than 90 members of the SFU community participated in these events.

Reed is a junior Business Analytics major from Richland, Pennsylvania. He becomes the second recipient of the $500 award.

Created last academic year to honor Martin Luther King’s legacy, the Dare-to-Dream Award is presented annually to a Black sophomore or junior pursuing a degree in the Shields School of Business.

The awardee is decided upon by SSOB faculty and staff.

“Teon is a wonderful young man with a tremendous amount of potential,” said John Miko, Associate Dean of the School. “Our faculty expressed to me how much they enjoy having Teon in their classes.”

In order to be eligible for the award, a student must exemplify the values of service, equality, justice and selflessness. The person must also be someone who demonstrates kindness and a respect for others.

According to Miko, Reed embodies all of these values.

“It meant a lot to me to know that people admire me for who I am as a person – my character – rather than anything else,” said Reed.

Reed said that receiving an award inspired by Martin Luther King was the real honor.

“He was an admirable man and an influential advocate for basic human rights,” said Reed.

In addition to Dr. King, Reed cited his father as one of his role models.

“My father not only taught me how to be a man, but he instilled the importance of respect in me,” said Reed.

“Respect for others, respect for myself, and the importance of respect within society.”

The Dare-to-Dream award has already received significant monetary funding in just its second year. Techabo, a digital commerce firm, recently made a significant contribution to the award fund. Marcus Penny, a 2003 graduate of SFU, is the CEO and founder of Techabo.

SSOB faculty and staff have also contributed to the award.