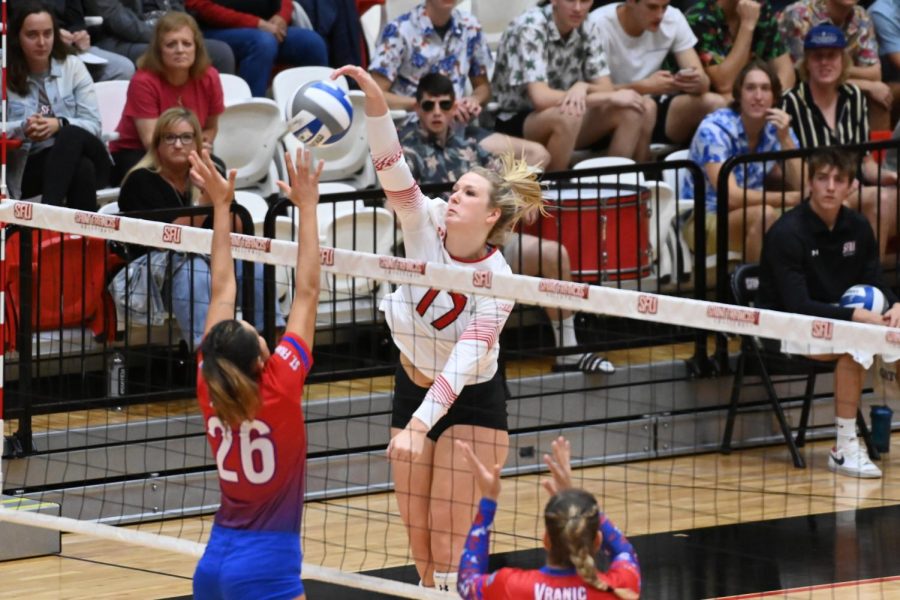 With a 3-0 straight sets home win over Central Connecticut on Nov. 6, the women’s volleyball team qualified for the Northeast Conference Tournament for the first time since 2014.

The team will travel to Brooklyn for road matches against LIU (Nov. 12) and Saint Francis-NY (Nov. 13) this weekend. The NEC Tournament will be contested Nov. 19-20 at the highest seed.

Senior Madi Tyus has provided steady leadership and standout play on the court throughout her final season in a Red Flash uniform. Tyus currently leads SFU and the NEC in kills (393) and kills-per-game (4.27).

She became the ninth player in Red Flash history to record 1,000 career kills, hitting that milestone earlier this season.

A native of Plano, Texas, Tyus credits her parents for her success as an athlete, both at Bishop Lynch High School and here at SFU. She said that their support has been unwavering throughout her career.

“I would never have even made it to Saint Francis without the dedication and countless hours of driving to practice and back from my mom and dad,” said Tyus.

“They made sure that they gave me every opportunity. They have always been in my corner when I have doubted myself.”

Tyus said she also appreciates the support that her head coach, Sara McMullen, has given her during her collegiate career.

“She has been here my entire career and she has made me grow not only as a person, but also as a teammate, leader and player,” she said.

A three-time NEC Player-of-the-Week honoree in 2021, Tyus ranks among the nation’s leaders in kills and points this season.

The Flash are 12-12 overall and 8-4 in Northeast Conference action entering their match at LIU on Friday. They have a chance to reach 10 wins in league play for the first time since 2012.