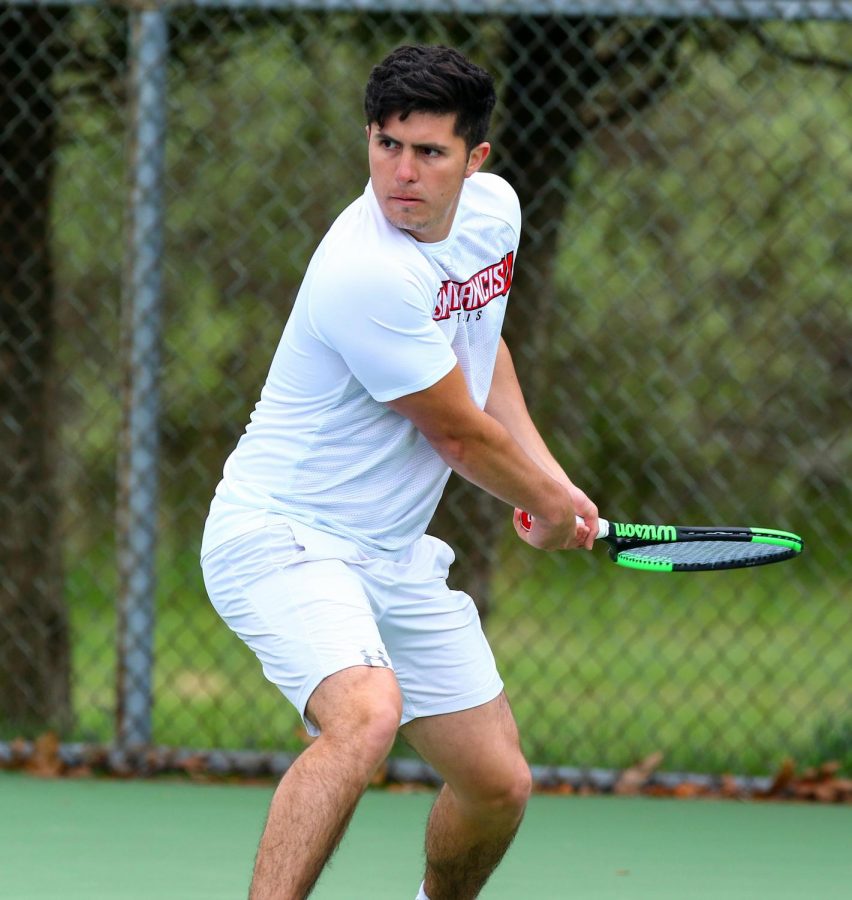 The men’s tennis team competed against a strong field at the ITA Tournament in Philadelphia from Oct. 14-17. It was the final action of the fall season for the team.

Andrew Teixeira, a junior from Sao Paulo, Brazil, faced a strong opponent from Binghamton University in the first round of qualifications. He lost in two close tiebreaker sets.

“Andrew really attacked well and was exceptional at the net,” said head coach Eric Hovan. “He definitely had his chances but rushed a little toward the end, which made the difference.”

Teixeira also competed in doubles at the tournament with Sebastian Pinos, a senior from Quito, Ecuador.

“Andrew and Sebastian played exceptionally well in doubles,” said Hovan. “They dominated a really good team from Rider to advance to the round of 32.”

“We were able to keep our focus on each game and secure the win,” said Pinos.

After the victory over Rider, Teixeira and Pinos lost to a high-seeded team from Cornell.

In singles action, Pinos dropped his first match of the tournament against a player from Bryant.

“Sebastian played at a very high level, but came up a little short against his opponent,” said Hovan. “Playing against that caliber of player will help him prepare for the upcoming spring season.”

Pinos was pleased with he and his teammates’ overall performance at the tournament.

“I think we had a pretty similar level of play as our opponents,” he said. “However, we still need to improve on certain things that cost us matches. We learned a lot from being here and we know what to practice on.”

He said he appreciates the opportunity to face such strong competition.

“Being able to play at such a high level is very exciting,” Pinos said. “It was a completely different atmosphere. I was able to learn many things from my own matches, but also from watching great players.”

Hovan also believes his team will benefit from their experience at this tournament.

“The ITA tournament was an amazing experience. It definitely inspired our players to work even harder to be able to win on that level.”