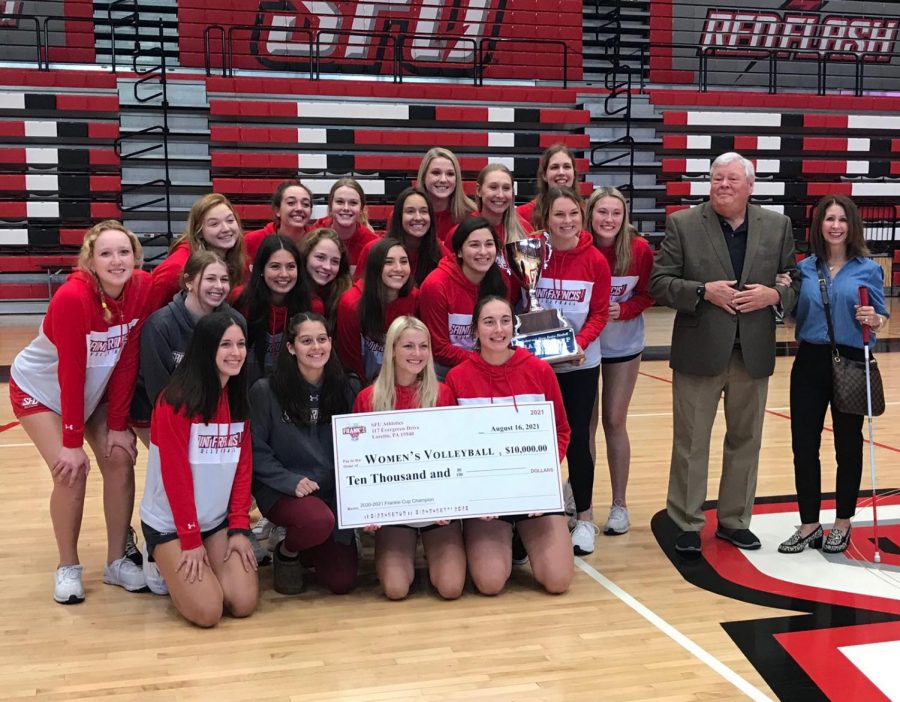 The Frankie Cup is awarded after each academic year to the team that collects the most points across a number of various categories, including academic and athletic performance, service and community engagement.

The Cup has been awarded annually since 2017. The goal of the Cup is to create a better and more well-balanced culture within the Athletics Department. Points are awarded throughout the academic year.

The 2020-21 Frankie Cup was presented earlier this month at the Stokes Center to the women’s volleyball team. With the trophy comes a cash prize of $10,000 to the winning program. The award is funded by Sheila and John Kimball.

This is the first time that the women’s volleyball team has been awarded the Frankie Cup. Former award winners include the women’s soccer team in 2017 and 2018 and the softball team in 2018 and 2019.

“We are very excited!” said junior defensive specialist Sydney Scott from Smithsburg, Maryland. “Our team has been working toward winning it these last few years. It was so nice to finally win.”

“Our team is really into community service. I think just being as involved as possible around campus gave us an edge.”

The team’s collective cumulative grade-point-average was also critical to capturing the 2021 Frankie Cup.

“This was very special for all of us,” said Rachel Langsdorf, a junior right-side hitter from Norwin, Pennsylvania. “We all worked extremely hard to accomplish this goal and each of us couldn’t have done it without the other.”

The women’s volleyball team is currently 5-2 in Northeast Conference action and will travel to Fairleigh Dickinson on Saturday for a 4 p.m. match against the Knights. The match can be viewed on NEC Front Row.