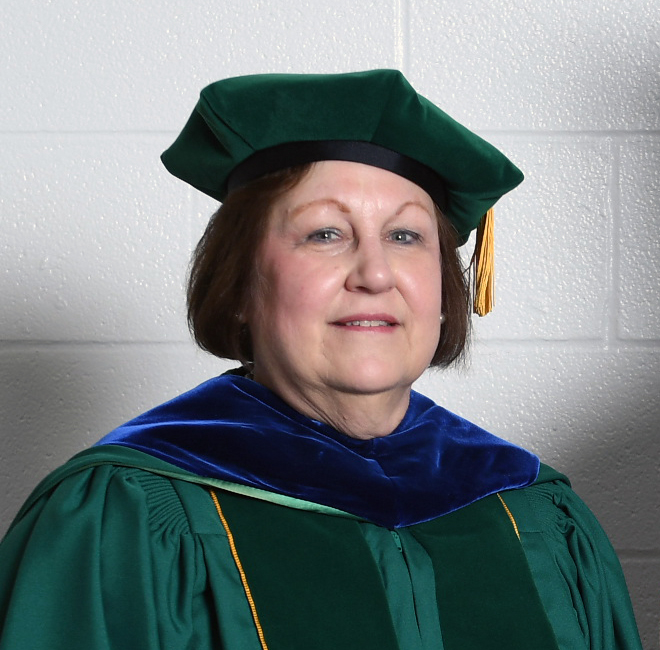 Karan Powell, Vice President for Academic Affairs, will retire at the end of the 2021-22 academic year. The announcement was made by University President Father Malachi last month.

Powell has served as vice president at SFU since June 2018. She has served in a variety of roles at the collegiate level, including president of the American Public University System.

Upon her retirement from this system in 2017, she joined the Registry, an organization that helps place experienced individuals in interim positions at universities.

“I had just joined the Registry,” said Powell, “and they (SFU) called me and two others to an interview here.”

Powell said that the Registry kept offering her other positions, but her intuition was leading her to Saint Francis.

“I felt this is where I was called to be,” she said.

When she met with Father Malachi and the University’s vice presidents, Powell said she couldn’t help but be impressed with the school’s mission.

“One of the things I said when I retired from the American Public University System is that I wanted to make a difference in Catholic higher education for the future,” said Powell.

“I was raised a Catholic, I did a lot with Catholic ministry, and I wanted to make a difference in the advancement of the Catholic higher education system.”

Powell’s colleagues believe she has achieved her goal.

“When Dr. Powell came in 2018, she brought with her a wealth of experience,” said Pete Skoner, Dean of the School of STEAM. “She came at a time when the University needed to change – enrollment had been down and financials were challenging.”

Skoner, who noted that undergraduate enrollment has been trending upward since 2018 in spite of regional demographic challenges and a global pandemic, commended Powell for her hand in “recreating SFU.”

He believes that – with Powell playing a key role – the University has become more relevant to today’s students. Part of this success, noted Skoner, was the creation of the School of STEAM from two smaller schools, a decision which has proven popular with enrolling students.

“Students want interdisciplinary, they want to be critical and creative thinkers, they want to be challenged,” he said. “They don’t see walls and silos, they see learning ubiquitously. And so does Dr. Powell.”

Powell plans to move to Montana with her husband following retirement to be closer to her son and daughter-in-law.

She said she could see herself pursuing consulting opportunities within higher education.

“I feel very blessed,” said Powell. “It’s been fun to be part of the life of the University. It’s been challenging at times, especially during a pandemic, but I’m struck by the resilience, the faith and the courage of our students, staff and administration.

“It’s been very rewarding to be a part of all that.”