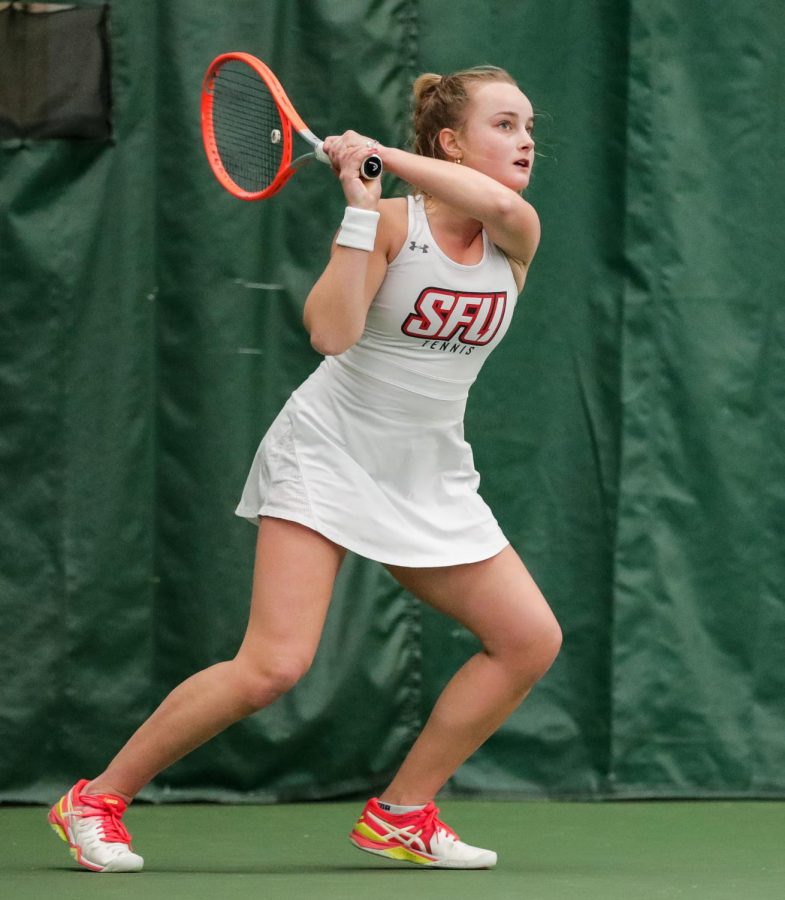 Dominique Yeo, a freshman from Leiden, Netherlands, has been named the Northeast Conference’s Player and Rookie-of-the-Month for February.

The freshman Communications major currently holds a 5-2 record while competing at first and second singles and a 4-3 record at the top flight in doubles.

“It has been awesome to see what a fierce competitor she is,” said head tennis coach Lisa Swope. “She has been exceptional and she brings a lot of positive energy to the team.”

The Dutch native has alternated between the number one and two singles spots for the Flash, reeling off five straight singles wins and four consecutive victories in doubles.

“It was really nice to receive that sort of recognition for my achievements on the court,” said Yeo.

“I’ve been training super-hard, and giving each match my best, so to get this sort of recognition is such an honor.”

Yeo’s dream of competing on a Division I tennis team dates back to her childhood and she is thrilled with the results so far. She also believes Saint Francis has provided her with a perfect fit.

“To be able to play my sport full-time, but also be able to get a diploma – it is something I’ve always wanted to do,” said Yeo.

“I worked with an agency, I got some other offers, and I looked at the division of the tennis and the UTR (Universal Tennis Rating) of the team,” said Yeo about her decision to continue her education and tennis career at SFU.

“I thought it was cool that this was Division I and that the team looked really good. I got along really well with the coach, so that was a main reason, plus the education here is pretty high.”

Yeo said she is looking forward to this spring’s NEC Championships, which are scheduled for April 15.

She is also looking forward to improving her game in Loretto over the next three years.

“I think with her and the other freshmen, Red Flash women’s tennis will continue to improve,” said Swope.

“I anticipate us making a major impact in our conference within the next couple of seasons.”

The Red Flash women’s and men’s tennis teams return to action on Friday, March 12, for a match at Duquesne.