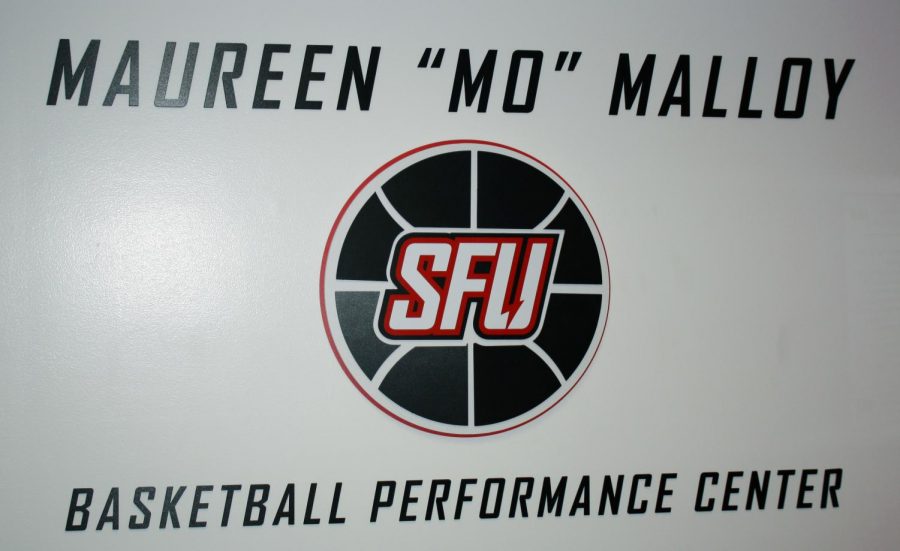 The Athletics Program recently named one of its training facilities in the Stokes Center the Maureen “Mo” Malloy Basketball Performance Center.

Funding for this weight room, which is located at the end of the first hallway as you enter the Stokes Center, was provided by alumni Steve and Jean Rogers. Steve is a former basketball player at the University. His wife, Jean, is a member of the Saint Francis Board of Trustees.

The Rogers wanted to honor Malloy, the longtime Torvian Dining Hall staff member who is also a fixture at almost all Red Flash home sporting events. At these competitions, she can be seen preserving the school’s athletics history with her camera.

“I’m elated that they thought of me,” said Malloy. “Our athletes are my kids.”

Mo has taken countless pictures of Red Flash student-athletes for almost a half century, while taking special care to capture the collegiate sports moments of those who do not play a lot. She has made it her mission to make sure these student-athletes’ special moments – even though they might be limited – are preserved.

“I still have pictures she took of me,” said Red Flash head men’s basketball coach Rob Krimmel, a 2000 graduate of SFU.

Malloy also shot pictures of Krimmel outside of the Stokes Center.

“Not only did she capture some of my greatest memories as a basketball player, but she also took the pictures at my wedding.”

Many agree that it is very fitting for Mo’s name to be attached to a facility that will help prepare Saint Francis student-athletes for competition.

“When you think of Franciscan values, it’s Mo,” said Krimmel.