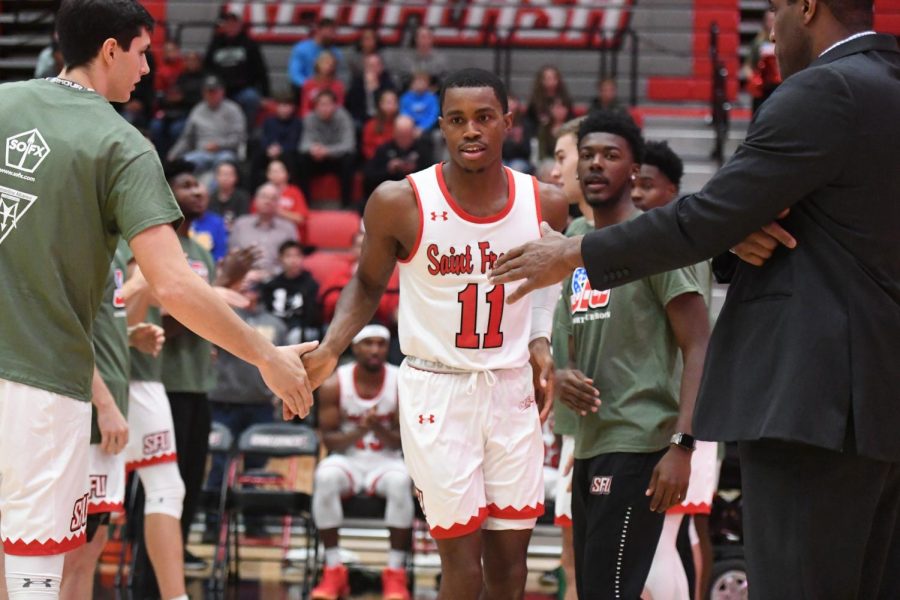 Keith Braxton and Isaiah Blackmon may very well go down as the greatest basketball duo in not only Saint Francis history, but also Northeast Conference history.

Both earned NEC Player-of-the-Year honors (Braxton in 2018-19; Blackmon in 2019-20) and the SFU star tandem is the highest scoring duo in NEC history.

Behind Braxton and Blackmon, Saint Francis advanced to three NEC title games in four seasons. This past season, the team won 22 games, the most for the program in 29 years.

Over the past four years, the program has won 75 games.

Braxton attended Delsea High School in New Jersey before spending a prep year at the Lawrenceville School. He had one Division I scholarship offer after his prep season – Saint Francis.

Braxton said he still feels like his experience at SFU is a dream.

“From having one scholarship to having the career I had was unimaginable,” said the three-time All-NEC first-team performer.

“However, with hard work and dedication, I was able to reach heights I didn’t think were possible.”

He became the first player in NEC history and just the second in program history (joining Maurice Stokes) to record 2,000 points and 1,000 rebounds.

For Blackmon, perhaps the most amazing number is two – that’s the number of ACL tears he has recovered from during his five years at Saint Francis.

For many, one ACL tear is enough to call it quits, but not for the Charlotte, North Carolina, native.

“What really kept me going is knowing I needed to get back out there and make something happen,” said Blackmon.

The 2019-20 NEC Player-of-the-Year finished his career seventh in program history in scoring with 1,606 points, third in three-pointers (218), and fourth in three-point percentage (42 percent).

“There’s no question he’s established himself as one of the elite players in this league,” said head coach Rob Krimmel.

Blackmon became a popular player among fans at the Stokes Center with his highlight-reel plays, whether it was a one-handed slam, a reverse or a 360-dunk.

These two already legendary players have a shared passion for basketball, but they also enjoy each other’s company. In their free time, they like to relax and play Fortnite together.

The combination of Keith and Isaiah is something special, but like all sports duos – Shaq and Kobe; MJ and Pippen; Dwayne Wade and LeBron – they all eventually come to an end.

While Flash fans hate to see them leave, they will always have the memories of these two all-time SFU greats.