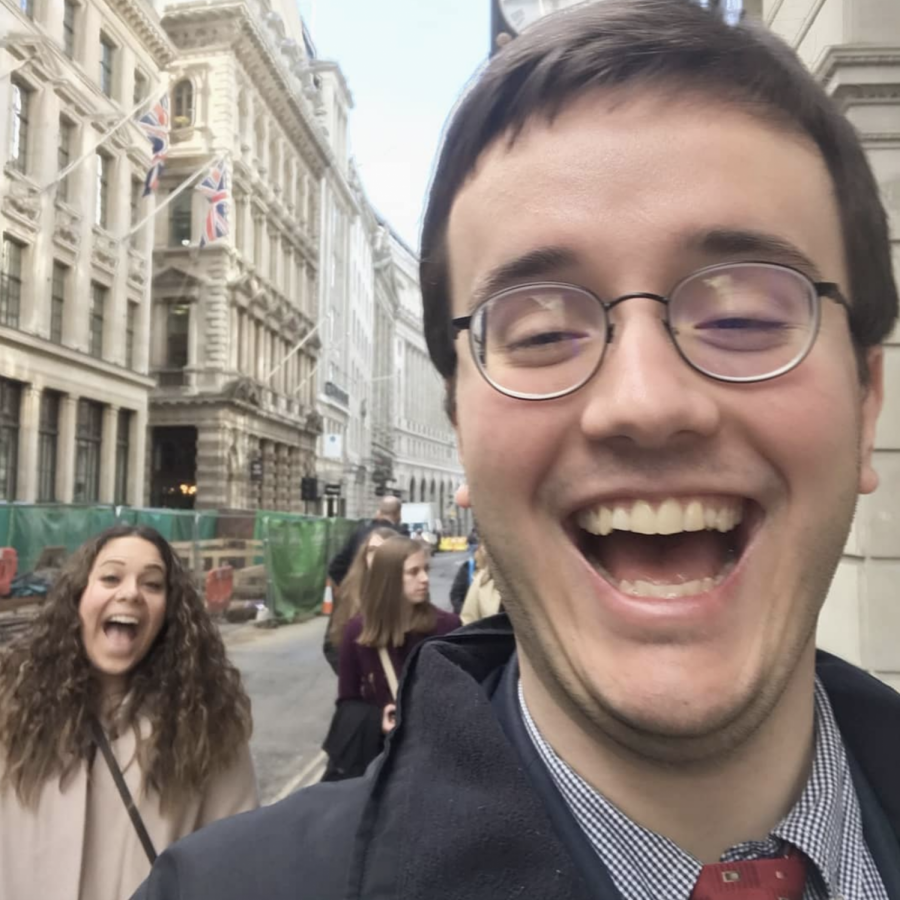 Even before he was born, Saint Francis University was already a part of Randall Frye’s life.

Dr. Randy Frye, Randall’s father, became chair of the Business Program in 1984 before Randall was born in 1995. Randall grew up making trips to campus to visit his father at work and it was always an adventure for him, whether it was asking his dad for money so he could run to the bookstore and buy a pencil, or winning Turkey Bowling during halftime of a basketball game. He recalled Mark Lynch from the Social Work Program dressed as Santa at the University Christmas party.

Eventually Randall’s two older brothers, Nathan and Cullen, enrolled at Saint Francis and graduated in 2010 and 2013, respectively from the Shields School of Business. Nathan and Cullen both served as presidents of Psi Upsilon Fraternity and both were involved in the Student Government Association (SGA). Cullen was also the Enactus Club’s president.

Soon Randall would enter Saint Francis as a student and create his own identity.

In August 2014, Randall was walking home from the laptop distribution, looking around the campus mall, filled with anticipation for the first day of school. The next day, he trekked down LPG Hill for the first day of class as a History major. Living off campus made it that much harder to make friends because he was not in a dorm, surrounded by classmates. And while part of him enjoyed his apartment off campus, another part wished he lived on campus to create those bonds.

Every day for the first two years of college, Randall would get his lunch from Padua Express and bring it to his dad’s office, shut the door, and eat by himself. He got to know the Business School’s administrative assistant at the time, Jessica, and she was his best friend. While he enjoyed this break from school, he did not realize how much he was missing out on.

Randall was always meeting new people, but it was hard for him to branch out because the faculty in the Business School was a second family to him.

“It’s not easy being the Dean’s kid,” said his father. “People presume they get some privileges and favors and they don’t. If anything, it’s harder on them.”

Despite this obstacle, Randall never changed who he was: a caring person who is nice to everyone and who possesses a passion for the things he cares about.

SGA did not have good student representation on campus for many years. It was not popular in 2014 and needed to have two elections to fill all the positions. Randall took a chance and ran for Class of 2018 Senator in November of 2014.  He won by three votes and began his career in SGA, along with a newfound sense of confidence.

Shortly before the renovations to Schwab Hall began, Randall walked through the building, excited for what was to come. When Schwab Hall was reopened in September 2016, it was one of the most amazing SFU memories for Randall because now the School of Business had a home.

Along the way, Randall changed his major from History to Business Management and added an additional major in Public Administration, with minors in History and Political Science.

On Oct. 4, 2016, SGA was cleaning up after planting flowers at Lake Saint Francis on Reach-Every-Door Day. Over the course of conversation, someone asked Marcus Milhelcic, a candidate for President of Student Government, who he would want to be his executive Vice President.

Without hesitation, Marcus pointed at Randall.

In February of 2018, Randall and Marcus visited Washington, D.C., where they sat in the House Chamber. While they were standing outside this historical building, School of Business faculty member Kent Tonkin took a picture of Marcus’ hand on Randall’s shoulder while they were laughing and said, “Guys never lose this, never lose this friendship.”

Randall found a new sense of courage that is still with him as he nears completion of the requirements for a Masters of Human Resource Management degree at SFU. In addition to his studies, Randall serves as a graduate assistant at the Knee Center for the Study for Occupational Regulation.

This is the same person who makes Saint Francis as special as it is. And someone who will be missed when he graduates later this month.

This is the same person who is a friend to students and an inspiration to everyone.

“You never know how special a place is until you have lived it and loved it,” said Randall. “The people make the place.”