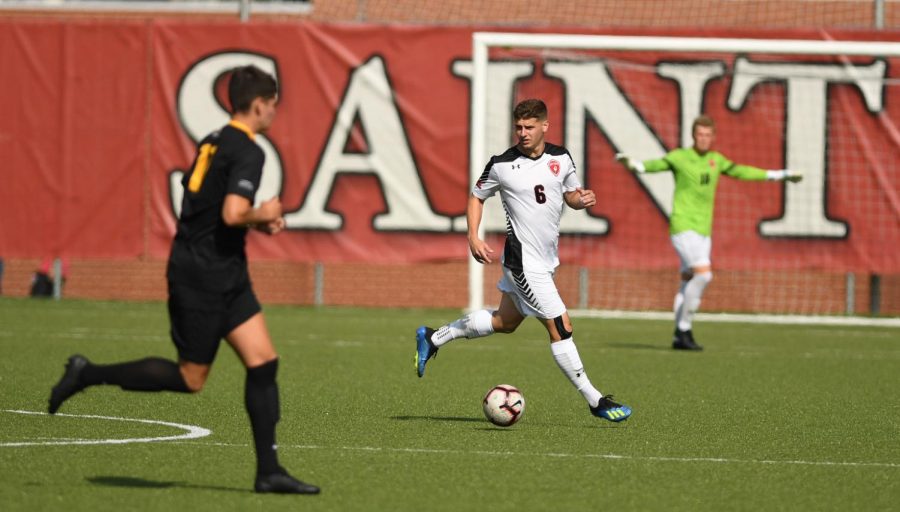 The intensity could be felt after SFU’s men’s soccer team brought Duquesne’s undefeated season to a screeching halt in a 2-1 victory on Sept. 24 at the Soccerplex.

The Dukes’ Zach Hall scored the first goal of the game 15 minutes into the match.

“Duquesne came in undefeated,” said SFU head coach Frank Olszewski. “As unfortunate as it was to give up the early goal, we came back and that’s something important to look back on going into conference.”

The game’s momentum quickly swung back in favor of the Flash when junior Brandon Ott netted the equalizer on a free kick that deflected off a Duquesne defender and into the goal in the 36th minute of the match.

Olszewski believed Ott’s first career goal was the turning point in the game because it “stopped their (Duquesne) momentum going into the second half and gave us a chance to put something together tactically.”

Freshman Jonathan Neil scored the go-ahead goal for SFU midway through the second half on a shot that went through Duquesne goalkeeper Robbie McKelvey’s hands and into the net.

Flash goalkeeper Jonas Dieseler made five saves for the win, including several fantastic ones.

The Red Flash defense did a great job keeping talented Dukes freshman Nate Dragisich in check during the entire game.

In the final 15 minutes of the match, the Dukes’ attack put the defense of the Red Flash to the test.

Many shots were taken, players fought hard for control of the ball, and two yellow cards were issued, one to each side.

“When they’re down 2-1, they’ll throw the kitchen sink at you,” said Olszewski. “If you don’t respond to it and take some chances, then they’ll take those chances.”

Ott believes the win over the Dukes demonstrated what SFU is capable of this season.

“We should have dominated the teams in some of the games earlier in the season, but we let them go,” said the Flash defender. “And that’s what really pushed us to come together in the end.”

Saint Francis (3-3-0) is off to Brooklyn on Sept. 27 to face Long Island in its first Northeast Conference match of the season.

“Friday’s probably the biggest game of our season,” said Ott. “We’re looking forward to that game.”