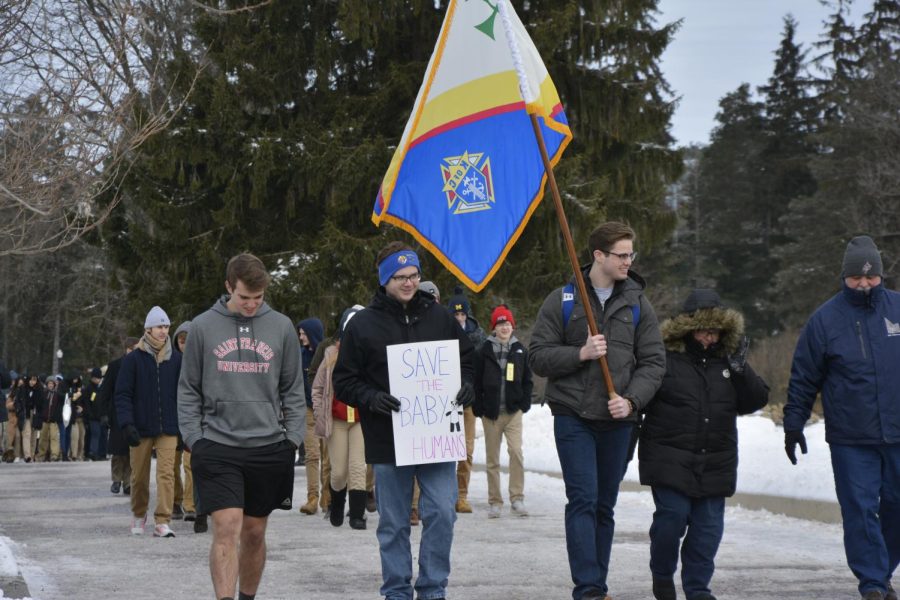 Saint Francis held its sixth annual March on the Mountain on the campus mall on Jan. 22. The purpose of the march is to support the movement to end abortion.

Paul Girardi, Associate Director of SFU’s Campus Ministry, started the March on the Mountain six years ago. He came up with the idea after he saw that many SFU students could not get out of class, and many local residents could not make it to Washington, D.C., for the annual March for Life event each January.

“It makes sense that a Catholic university is promoting a pro-life march,” said Girardi.

The March on the Mountain includes a number of different events throughout the day, providing students who have classes the opportunity to fit some of the activities into their schedule. Activities that were part of last week’s event included praying the rosary, marching on the mall, attending mass, and Eucharistic Adoration.

The number of participants at the March on the Mountain has grown each year since its inception in 2014. That year, there were 35 participants. Last week, around 160 people participated in the event.

“I think it’s awesome to see so many young people take a stand and really understand the value of life,” said Girardi.

Temperatures during last week’s March barely rose out of the teens, but that did not deter those who participated on the 46th anniversary of the Supreme Court’s Roe v. Wade decision.

“Despite the poor weather, the overall atmosphere was positive and enthusiastic,” said SFU student Zach Lahart.

SFU’s Students for Life organization and Campus Ministry sponsored the March on the Mountain.

“I think it is so great to see the community gather and march for life,” said SFU student Teresa Narduzzi.