Kovatch not done in Loretto just yet 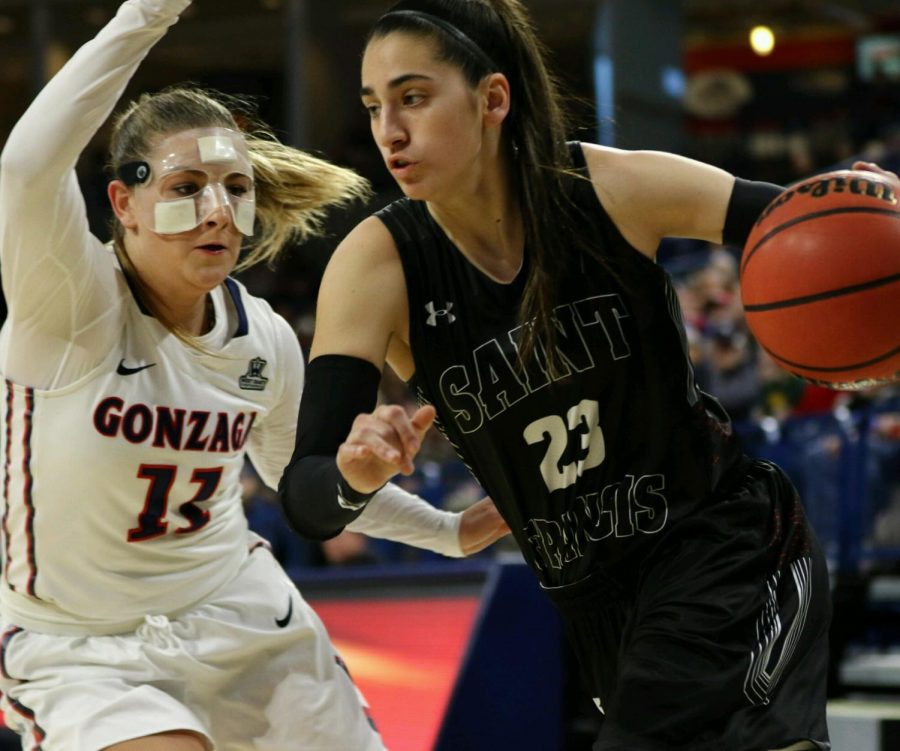 She wasn’t the best on the team, but he could see her potential. He circled her name in his big book of recruits and moved on to the next game, not really thinking about recruiting Jessica Kovatch.

In hindsight, Haigh is sure happy that he did.

It is now Kovatch’s senior year at Saint Francis. She has already left her mark here, but she’s not finished. Jess is just 180 points behind both the University’s and the NEC’s all-time leading scorer, Jess Zinoble. She finished second in the NCAA last year at 24.4 points per game, and she is on track to break the school and NEC scoring record before Christmas.

“I probably won’t prepare any differently. I think that if it comes, it comes,” says Kovatch. “I’m not really working to break the scoring record. I think I will just go out and play every night, the way I did my freshman year, just wanting to win and make my teammates better.”

Kovatch was not recruited by many other Division I colleges during her high school career. She chose Saint Francis because of its location. It is relatively close to her home of Phillipsburg, New Jersey, and she enjoyed the small community atmosphere that Loretto has to offer.

Fellow senior Jill Falvey says that Kovatch’s personality really helps set the tone for the team. Many people have not seen the goofy side of her, but all of her teammates have experienced it.

Falvey says she knows how to have a good time and make people laugh, but she also knows when it’s time to focus on basketball.

“She is always in the gym. Whenever I walk in the gym, she’ll be in there 90 percent of the time, shooting, even if it’s just for fun, goofing off. I think that is really hard to find today.”

Kovatch is a competitor. She is always ready to challenge someone to a one-on-one game or a three-point shooting contest.

However, off the court, she does not boast about her achievements or records. This makes it very easy to root for her.

“I want to go to school and be successful for my parents because they helped me growing up,” says Kovatch. She also adds that she “wants to prove other schools wrong who overlooked her.”

Mission complete on this front. Kovatch set an NCAA record last year for most three-point field goals in a season with 141. She was also second in the NCAA in points per game (24.4 ppg).

She finished the season by leading her team to the 2017-18 NEC championship.

“No one expected Jess to be as good as she is or to score as much as she did. She made the most of a great opportunity,” says Haigh.

“Jess has had an amazing career. It’s a product of our offense, a great opportunity, and the work that she’s put in over the years.”