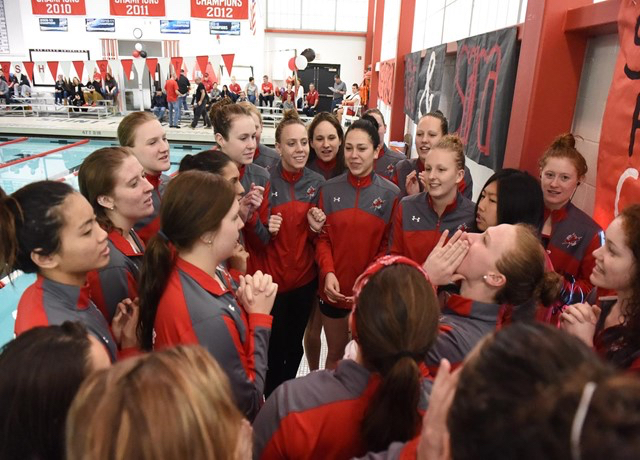 The SFU swim team will travel to Cambridge, Massachusetts, for the Northeast Conference Swimming and Diving Championship, Feb. 15-18.

“Over the last three years, we have placed fourth in the NEC,” said Coleman. “This year we need to move up in the conference. Our biggest challenge will be moving up into second or third place.

“There should be a nice battle between four different schools that can possibly move into second. Wagner, LIU-Brooklyn, Bryant and [SFU] will be battling for second through fifth place.”

The Red Flash opened the season with back-to-back losses before placing first at the Colgate Fall Classic, then posted wins against all six teams at the Northeast Catholic Invitational at Boston College.

The team will compete against seven other schools at the NEC Championships.

“The champions from last year, CCSU, are definitely a team to look out for again this year at NECs,” senior swimmer Paige McLean said. “They have added a lot of fast freshman swimmers and are very strong as a whole.

“Wagner and Bryant are also very strong teams, although I believe we will be able to surprise many people this year.”

McLean, an Ontario native, regularly competes in the 1650-freestyle and 400-individual medley. She will also swim either the 500- or 50-freestyle at the NEC finals.

“I believe we have a great team this year,” said McLean. “In my four years here, I think this may be our fastest team. I am really excited to see what we can do this year at NECs.”

Coleman believes that setting the tone early at the championship meet will be crucial.

“Our team swims at its best when they’re having fun,” said Coleman. “If we can set the mood right on the pool deck and have them all jump aboard the ‘fun train,’ things will go well for us.

“We are very serious about our swimming, but the mood on the pool deck needs to be goofy, silly, fun with a lot of dancing.”

With just six upperclassmen on the roster, the young SFU team has already accomplished plenty.

“I am very proud of our team and the way they handled themselves in and out of the pool and especially in the classroom,” said Coleman.

“We currently have the largest roster size ever at Saint Francis. This creates its challenges, but has its positives. I am very fortunate to have 26 women on the team who represent Saint Francis in a positive manner at all times.”