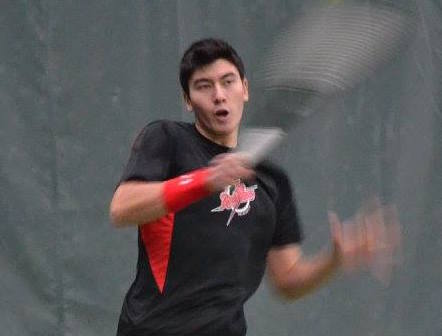 Danielle Gryckiewicz
Gervais started playing tennis at 13 in Montreal, Quebec, Canada. He trained at Academie Menard Girardin, one of the largest training facilities in Canada. The academy is known for producing players who compete on WTA (Women’s Tennis Association) and ATP (Association of Tennis Professionals) Tours.

By 16, Gervais knew college tennis and professional tennis was something he wanted to pursue.

“My parents always told me my studies were a priority,” said Gervais. “All of my entourage agreed that college tennis was the best option for me, as I could study and play tennis at the highest level.”

Gervais believes that earning a degree in political science will allow him to go into professional tennis with less pressure on his shoulders.

Gervais explained that he will be starting at the bottom, competing in lower ranked tournaments known as “futures.” From there the goal is to earn ATP points. ATP points give tennis players a world ranking, allowing them to compete in bigger tournaments in which more ATP points can be earned.

“I am both excited and confident about this upcoming challenge,” said Gervais. “In a sense, I have been waiting for this moment for a long time.”

Throughout Gervais’s college career, he has played at the number one spot for the Red Flash. Gervais led the team with 20 singles wins as a freshman

“College tennis has definitely prepared me for professional tennis,” said Gervais. “College tennis teaches you to fight and find ways to compete at your best.”

Gervais’ ultimate goal is to become a top player in the world; however, he says you need to be realistic.

“I believe no one is perfect in sports,” said Gervais. “There is always room for improvement.”

As long as Gervais continues to improve, he will continue to work toward becoming professional.

“I am looking forward to simply be on the court and live the dream,” said Gervais. “I want to keep finding new ways to keep improving, and in the end, I want to win.”

Head men’s tennis coach Rob Castille believes that one of the biggest challenges of becoming a professional tennis player is the “daily grind” of the tour.

“We only see the glitz and the glamour of the tour because we see the best of the best,” said Castille. “For the majority of the players, it takes a lot of time to get to that stage.”

Castille also believes that although Gervais is talented, his goal should be to get a little bit better every day. “Washi definitely has the talent,” said Castille. “But at the pro level, everyone has talent.”

“I am sure he will work hard to improve every day,” said Castille.