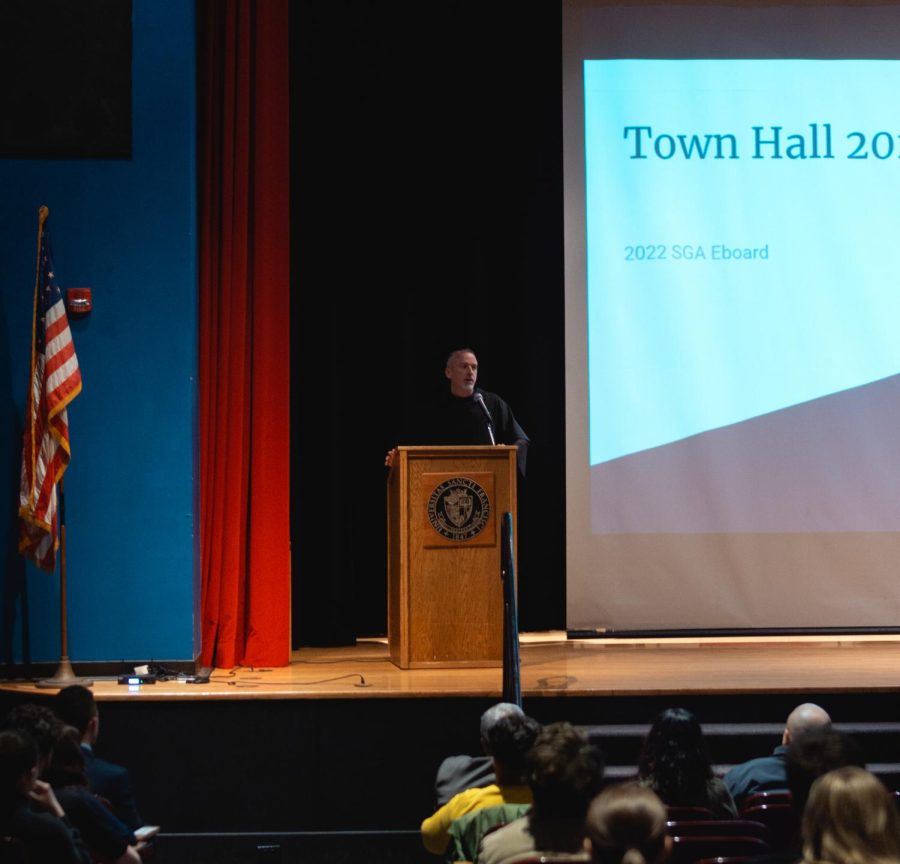 Town Hall, which is open to everyone in the University community, affords students the opportunity to ask questions to a panel of administrators.

The Town Hall was moderated by the SGA Executive Board.

The event began with Father Malachi discussing various building projects currently in the works, including the conversion of the Boilerhouse and the Fine Arts Garage into a new Occupational Therapy Building, and the construction of the Connors Family Fine Arts Center.

Following Father Malachi’s presentation, SGA President Isaac Johnsen took the podium and provided an update on what the SGA has accomplished so far this semester, specifically focusing on Title IX and mental health.

“One of my main goals as president has been, and continues to be, raising awareness for mental health,” said Johnsen.

“SGA has been promoting mental health awareness through a variety of projects, like the timely feedback proposal, and by encouraging overwhelmed students to visit the counseling center.”

Another of the SGA’s main concerns this semester has been dealing with Title IX cases, and general misinformation concerning the topic.

“If we’re going to solve [the problem of sexual assault and sexual harassment on campus], we have to act as a community,” he said.

“We need to remember that there is no one enemy,” she said. “Sexual assault is the enemy.”

Johnsen and Banks told the audience that the University is bringing in someone to audit how SFU handled previous (and ongoing) Title IX cases.

Town Hall concluded with a question-and-answer session, with many students voicing concerns about parking and meal plans. Many of the problems raised by students, including commuter parking issues, will be reviewed during the summer.

Johnsen encourages any students with questions or concerns regarding any aspect of student life to contact him, or other members of SGA. Father Malachi likewise encouraged students to do the same.

“Student voice will give input on future years to come,” he said. “SGA is that voice.”