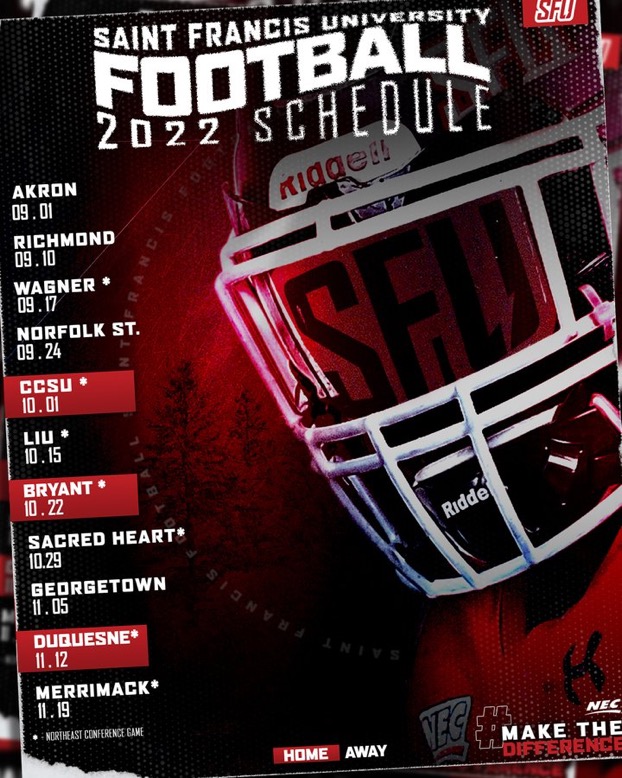 The 2022 Red Flash football schedule has been released, much to the excitement of the coaches and the players.

“The goal every year is to bring the NEC championship trophy back to Loretto,” said defensive coordinator Scott Lewis.

“The goal is an NEC Championship, same as every year.”

The lone NEC title in the football program’s history came in 2016, but both the team’s coaches and returning players believe another title is within their reach.

In order for that to happen, Lewis said the team needs to improve at situational football.

“We had three important conference games (last year) in which we lost all three by five points or less,” he said. “Stuff like that comes down to getting them off the field on third down.”

Lewis said the opponent he is most excited to face in 2022 is Akron. The Red Flash and the Zips will face off in Akron for both teams’ season-opener on Sept. 1.

“When you play a program at the FBS level, you really get to see what the guys are made of.

The 2022 schedule includes just three home games. Lewis said this was the result of scheduling challenges resulting from the pandemic.

McGowen said he and his teammates are disappointed they won’t be playing in Loretto much in the fall, but that they are also excited to make the most of their opportunities.

“You have to look on the bright side,” said the freshman from Johnstown. “If we win on an opponent’s field, the team is more motivated.”