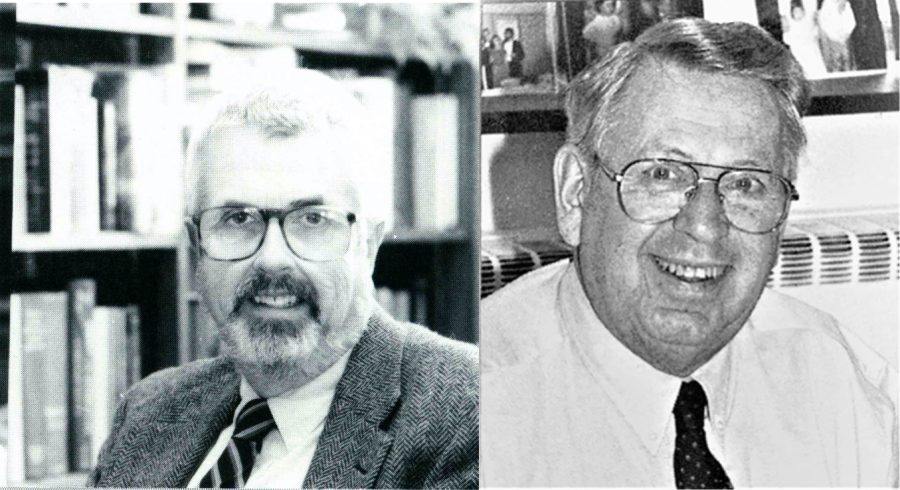 The SFU community mourns the loss of two long-time professors, both of whom passed away earlier this month: Dr. Rodrigue “Rod” Labrie and Dr. Lawrence Pion.

Labrie began his 41-year teaching career in 1956 as an instructor of English at Saint Francis, which he also attended as an undergraduate. He served as Chair of the English Department for much of his career before retiring in 1997. While at SFU, he taught many courses, including American Literature and Business Writing.

Pion, a native of Providence, Rhode Island, spent more than 60 years working in the classroom as a Biology professor—a department he also chaired for 11 years. He also served as the first Director of the school’s Physician Assistant Program. In addition, he launched the Marine Biology Program and served for many years on the Faculty Senate.

Former students remember both Labrie and Pion as outstanding teachers, dedicated to educating young minds. Each of them made significant contributions to Saint Francis and both leave lasting legacies at the institution.

A plaque hanging on a wall in Scotus Hall, presented to Pion after his 25th year of teaching at SFU, describes the kind of professor he was.

“Throughout his 25 years of dedicated service to a generation of Saint Francis College students, Pion has placed unswerving emphasis on two important educational values: quality instruction and attention to individual student needs and aspirations.”

Indeed, Pion was an inspiration to the hundreds—if not thousands—of students that he taught. A former student wrote in an article published in a 1983 copy of The Loretto that Pion’s passion for teaching engaged even the most hesitant of students.

“As a freshman who deplored the thought of having to take a biology course, I found Pion’s General Biology class to be an unexpectedly worthwhile experience,” noted the student.

“Through his skillful presentation of the material, attempts at artistry on the chalkboard (his renditions of animals are really something to behold), [occasional] puns, and reassuring geniality, he did more than make biology bearable: He made it interesting.”

Pete Skoner, Dean of the School of STEAM, echoed these sentiments, adding that Pion built quite the rapport with biology majors.

“Many of the alumni I speak with point back to lessons learned from [Pion],” said Skoner.

Skoner noted that Steve O’Brien, one of Pion’s former students, told him that Pion taught him to love science and to set the bar high. O’Brien took both of these lessons to heart – he graduated from Saint Francis and became a chief scientist for the National Institutes of Health.

“Rod was a giant, larger than life,” said John Woznak, a longtime professor in the English Department. Woznak is both Labrie’s former colleague and student. “He was very well-read, but always had his students come to their own conclusions.”

Woznak said that Labrie was well-respected by students and faculty alike, something that the plaque commemorating his 25 years of teaching at SFU also notes.

“Dr. Rodrigue Labrie is an academician of rare blend: respected, erudite teacher and skillful, sensitive administrator,” it reads. “As administrator, he has acted with such integrity and decency that his departmental colleagues regard him more as friend than regent.”

“He really was a great friend,” said Woznak, explaining that Labrie was gifted with the ability to converse with anyone about anything. “He was willing to listen and offer his insights.”

Both Pion and Labrie will be remembered for their significant contributions to the University.

For Skoner, Pion’s legacy is that of the Physician Assistant Program.

“[Pion started] the Physician Assistant Program at a time when it was a brand-new profession,” he said. “It has been the most popular academic program on campus for many years and produced many graduates, including one of my children.”

In memory of Labrie, the Department of English is establishing the Dr. Rodrigue Labrie Award in American Literature, the first of which will be presented during the STEAM awards ceremony in April.

“Rod’s legacy will be the way he inspired his students,” said Woznak, explaining that it was after a conversation with Labrie that he decided to continue his education at the graduate level.

“He told me that I had what it takes, and when he told you that, you knew you could do it.”