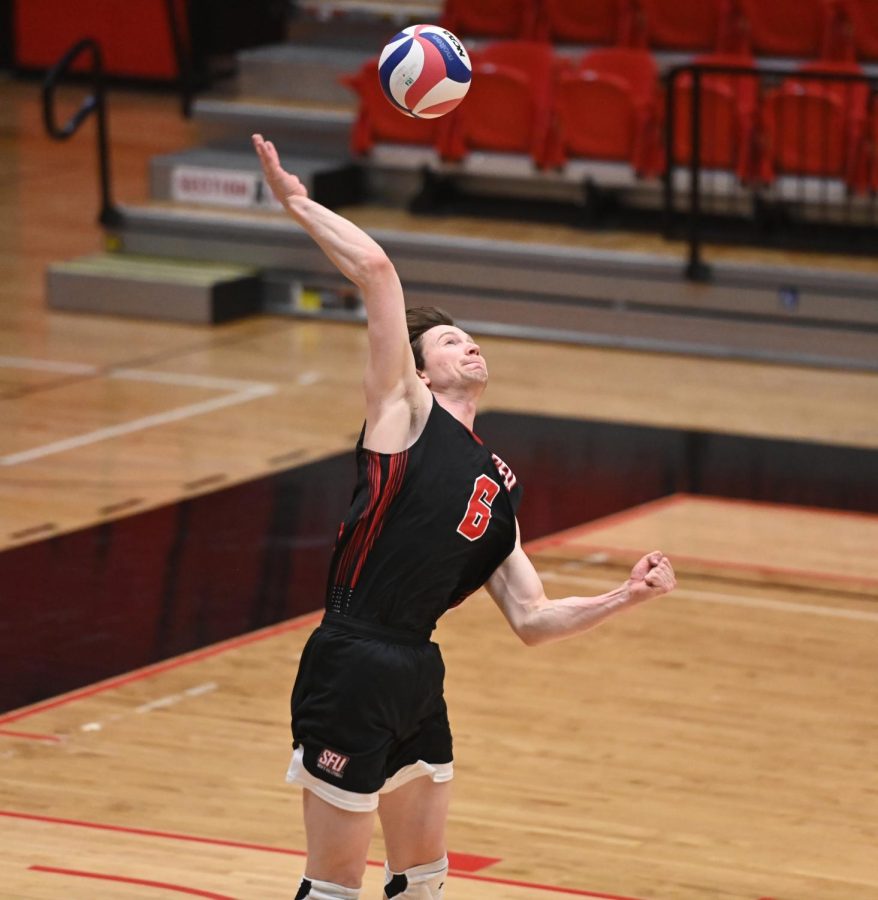 Outside hitter Blake Liprando has been outstanding for the Red Flash men’s volleyball team to open the season and his squad is off to a fast start in large part due to his play on the court.

SFU enters this weekend’s action with a 7-5 overall record and a 4-1 mark in the Eastern Collegiate Volleyball Association. The team is undefeated at home (4-0).

SFU had won six matches in a row before dropping a decision at Penn State on Feb. 19.

“The type of energy Blake brings to the team in practices and games helps fire us up, building momentum when we are out there on the floor,” said sophomore libero Matt Menosky.

When watching Liprando play, fans can sense his passion and focus on every single attack.

This energy carries over to his teammates.

“Knowing that this is our last season in the EIVA has inspired my teammates and I,” said Liprando. “We want to leave a mark in every game we play.”

The Northeast Conference will begin sponsoring men’s volleyball in 2023 and Saint Francis will move from the EIVA to the NEC next season.

Liprando currently ranks sixth in the EIVA in kills and seventh in digs.

His impact on the court has been obvious to his teammates and fans, as well as longtime SFU head men’s volleyball coach Mike Rumbaugh.

“Having an electrifying player like Blake has made his teammates want to match his energy, which contributes to us as a whole,” said Rumbaugh.

“Blake also has the experience on and off the floor to lead, which creates a bond of trust from his teammates.”

Liprando said that he went back to the basics of his sport following last season.

“I focused on overall fundamentals, IQ and ball control, which has changed the way I react when attacking the ball and when the ball is being hit toward my direction,” said the junior from Mechanicsburg, Pennsylvania.

“In addition, I’ve focused on eating healthy and my cardio to stay in shape.”

This weekend, Liprando’s team will play three road games in as many days, with matches at New Jersey Institute of Technology (Feb. 25), Saint Francis-Brooklyn (Feb. 26) and LIU (Feb. 27).

“Staying level-headed and focused starts for us in the beginning of the week and every day in practice,” said Rumbaugh.

Liprando believes his team needs to continue to make sure they leave it all out on the court in each match.

“We want to remain at our full potential, so it’s important we all keep pushing and developing our game.”