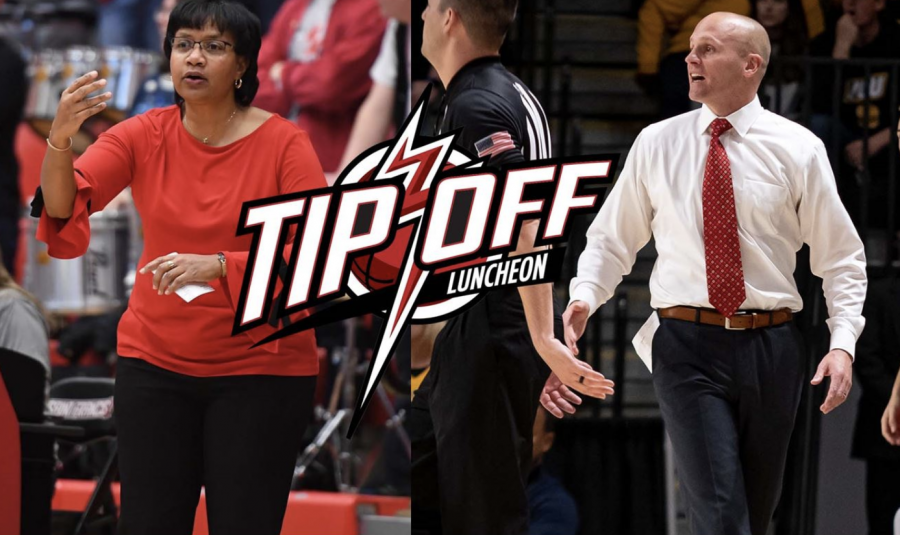 The men’s and women’s basketball teams held their annual tip-off luncheon/media day on Oct. 26. Coaches and players shared their goals and thoughts on the upcoming season at the event.

Whittington, who enters her third season as head coach, thanked all those involved with the women’s program and talked about her hopes for her team this season.

“Our goal is to always work for a championship and that’s where we are,” she said. “That was my goal when I came here in April 2019 and it doesn’t change on Oct. 26.”

Krimmel, who ranks second among head coaches in program history in career victories, expressed his happiness that the University was conducting an in-person media day this year.

The 10th-year head coach and 2000 SFU alumnus also noted his gratefulness to all those involved with his program. He discussed the previous season’s challenges due to Covid and injuries, and he explained the process he used to determine his team captains for the upcoming season.

Krimmel said Thompson earned his captain’s role after an emotional moment with Krimmel’s son immediately following the team’s loss in the Northeast Conference championship game at Robert Morris at the end of the 2019-20 season.

“My oldest son was distraught after the loss (to Robert Morris),” said Krimmel. “The first guy that walked over to him was Myles. That’s how he became captain.”

Krimmel said Thompson’s leadership alongside Dixon-Conover during an extremely trying season last year showed their determination to help the team be the best it can be.

This is the second straight year that these two players will serve as the program’s captains. Ruggery enters his first season in a captain’s role.

“Ramiir called me in the middle of the pandemic and said ‘I want it. I want to be captain. Put me in.’ I said alright.”

Dixon-Conover said he appreciates the opportunity.

“I get the chance to mentor and help my teammates improve throughout the season.”

The women’s team’s captains for the 2021-22 season are Jordan McLemore and Jada Dapaa.

Dapaa is a first-time captain and, like Dixon-Conover, she appreciates the opportunity. The women’s team’s players voted on who should serve as captains in 2021-22.

“It feels good to know that my teammates have that much trust in me to lead them as a team,” said Dapaa. “I look forward to witnessing the team develop and achieve goals in order to put ourselves in the best position to win a championship.”