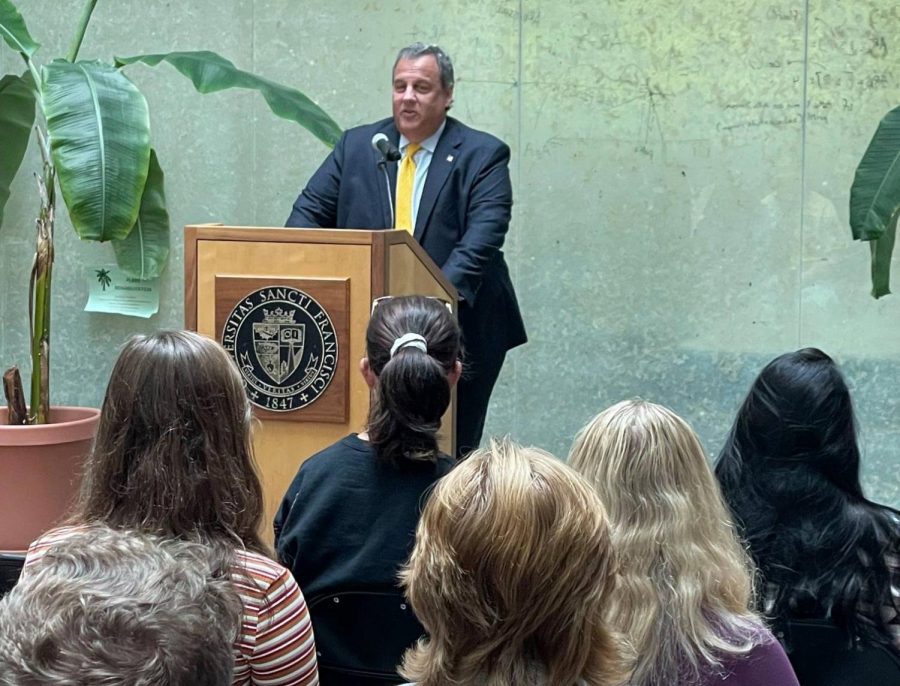 Christie served as governor of New Jersey for eight years, from 2010 to 2018, and sought the Republican nomination for president in 2016.

His visit was part of the Robert and Thelma Gleason Lecture Series on American Politics and Government.

Christie spent the day meeting with students and faculty before delivering a lecture on bipartisanship in America in Schwab Hall.

“The single biggest problem [in American politics] is that we see people of different political parties as bad people, as enemies, because we disagree with them,” said Christie.

The former governor went on to say that this mindset of seeing the opposing political party as an enemy began in earnest in 1994.

“Of course, political parties have always had a long history of disagreements,” said Christie. “But it wasn’t really until Newt Gingrich and Bill Clinton began verbally attacking each other that it became the norm.”

“I was speaking with a member of British parliament once who said she was confused by the U.S. voting system,” said Christie.

“What she didn’t understand is that in America, you don’t vote for who you want to vote for—you vote for who’s left.”

Christie pointed to the 2016 U.S. presidential election as a prime example. He said that despite both Donald Trump and Hillary Clinton only polling consistently in the 30s, they became the candidates for the Republican and Democratic parties, respectively.

The former governor also shared his thoughts on President Joe Biden’s performance as president. Christie said Biden will ultimately fail on his campaigned platform of bipartisanship.

“To bring the country together, you have to be willing to fight with your own party,” said Christie. “The president we have now isn’t willing to do that.”

“If nothing else, Hurricane Sandy was exemplary of true bipartisanship,” he said. “People on all sides of issues working together to achieve a common goal. It showed that political parties can work together.”

Christie said that to achieve real bipartisanship, people need to get to know each other better.

“It’s a lot harder to hate up close.”

The lecture ended with a question-and-answer session. The question of Christie’s political future—namely, if he plans on running for president in 2024—was posed to the former governor.

“If I ever run again, it will only be for president,” Christie said. “It’s either president or nothing.”

Christie stressed the importance of voting, saying that Americans get the government they deserve.

“It’s your responsibility for what the country looks like,” he said. “You decide. Our country is not too broken to be fixed.

“It’s too strong, too resilient, and its people are too good.”