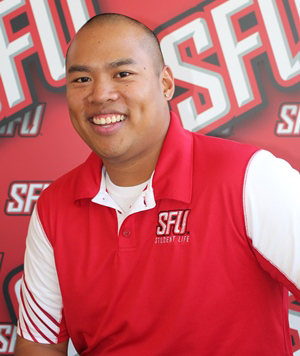 Luke Trotz, assistant director of student engagement at the University, died last month at the age of 28. While Trotz worked at Saint Francis for only six years, he made an imprint on the school that will last a lifetime.

Students and staff alike mourn the loss of Trotz, a man whose energy knew no limits.

“I remember the day I first met Luke,” said Bobby Anderson, who served as director of student engagement at SFU before assuming his current role as associate dean of admissions. “I was standing by the windows at JFK and I see this sports car with tinted windows pull in the parking lot. Out steps this guy wearing a pink blazer and diamond studs in both ears, and I just think to myself ‘look at this guy.’”

Look at this guy

Part of the application process for the assistant director of student engagement position required candidates to create an itinerary for Welcome Weekend. Trotz created an entire website, complete with functioning links.

That is, until Trotz opened his mouth.

“We told Luke, ‘Go on. Pretend we are freshmen at orientation,’” recalled Anderson. “And Luke was pumped. He clapped his hands together and said, ‘Hey there everyone, and welcome to UPJ.’

“We all laughed,” said Anderson. “Luke got his undergrad (degree) from UPJ and was working there at the time, so it was completely understandable.”

Trotz asked for a do-over.

In his second attempt, he correctly identified Saint Francis.

“He was literally bouncing, he was so excited,” said Anderson. “By the end of the presentation, he was sweating profusely.”

It is hard to imagine a more enthusiastic candidate than Trotz, who was offered the job.

It was hard not to be his friend

It wasn’t long before Trotz’s energy caught the attention of the student body.

“Luke was like a flame,” said Miranda Snyder, a senior political science major and Esports team member. “He drew people to him because of how kind and genuine he was.”

“It was hard not to be his friend,” added Jacob Garrity, a freshman Esports team member.

Garrity recalled how Trotz reshaped the Esports team at Central Cambria High School in Ebensburg. He credits Trotz for helping make the Central Cambria team successful, and said that Luke was one of the main reasons he chose to attend SFU.

Trotz was instrumental in creating the Esports program at SFU.

“Father Malachi sent around an email, talking a little bit about the emergence of Esports,” said Anderson. “I didn’t think much of it until I saw a news story on it.”

Anderson began to seriously consider the idea of launching an Esports team at Saint Francis. There was only one problem: he wasn’t much of a gamer.

“I went to Luke’s office and I said, ‘Hey, you like to play video games, right?’”

From that conversation, the seeds of the Red Flash Esports program were sown.

Over the course of the next several months, Anderson and Trotz – with the help of others – created the Esports program from “scratch.” True to the school’s Franciscan tradition, Trotz found ways for the program to raise money for charity.

“Luke was all about helping others and giving back,” said Snyder. “He found this event called Extra Life that allows gamers to raise money for charity, then entered us in it.”

“Luke found a way to raise money for those in need,” said Snyder. “If that doesn’t tell you a little bit about who he was, then I don’t know what will.”

Everything he did was for them

ESports was not Trotz’s only responsibility at the University. He also oversaw SFU’s Greek community, which lead to some long workdays.

“It was nothing for him to work twelve, thirteen or even fifteen hours a day,” said Snyder. “And he was almost always at our Esports games.”

“He really cared about the students,” he said. “Everything he did was for them.

“If my fellow faculty and staff were to take one thing away from Luke, it would be his commitment to his students and the compassion he showed each and every one of them.”

When SFU reached out to sister school Franciscan University in Steubenville, Ohio, and asked friars there to keep Trotz in their prayers, they mistakenly assumed Trotz was a campus minister.

“Luke touched so many students’ lives. He was such a kind, genuine man, who truly cared,” said Anderson. “Ask any student who knew him and they will likely tell you about a time he helped them through something.

“That’s a campus minister if I ever saw one.”

Saint Francis was his home

Trotz will forever be remembered by students and colleagues as a caring man, full of energy and happiness. Someone who made his mark at the University.

“Luke used to say that, though he went to UPJ, Saint Francis was his home,” said Anderson. “Saint Francis made him the man he was, just as he made Saint Francis the school it is.”

Trotz’s family understood how much Saint Francis meant to him. The outfit they chose to dress him in at the viewing following his death was the pink blazer he wore to his job interview at the University six years ago.

“It was a callback to the day he found his home,” said Anderson. “They knew that Saint Francis meant the world to him, and they wanted to honor that.”

As the campus community mourns the loss of such an extraordinary individual, it should find solace in the joy that Trotz found here on his mountain campus – his home – every single day.