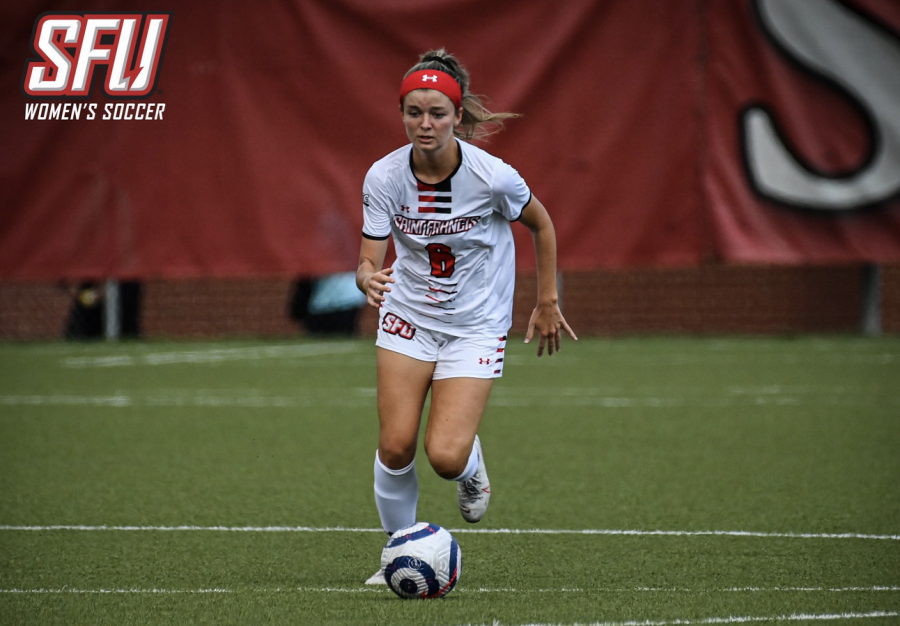 Senior Corinne Renninger contributed at both ends of the field to help lead the Red Flash women’s soccer team to its fourth consecutive home victory, a 3-1 win over Robert Morris on Thursday.

Renninger finished the game with two blocked shots, including a chase-down on a breakaway on Robert Morris forward Gabriella Lacuena.

Lacuena found herself with the ball at her feet and Renninger was able to get in defensive position before Colonial player got her shot off.

Three minutes later, Renninger blocked another rocket shot from Lacuena from inside the box to keep the Red Flash lead at one.

At the 70-minute mark, Renninger was able to put one in the back of the net that gave the Red Flash a lead they would not relinquish.

SFU head coach Ellie Davis praised the work of her senior captain after the game.

“We’ve always known that Corinne is the enforcer of this team and it’s great to have a player who is able to come out on defense and score a goal for us.”

Renninger credited teammate Alex Martinez for a great crossing pass on the goal.

“They just put a great cross in, and it bobbled around, then I was able to put it in the back of the net.”

Freshman Rita Kendziora notched her second goal of the season in the seventh minute of the contest. She was able to strip the goalie and put one in the back of an empty net.

Robert Morris tied the game 1-1 in the 66th minute. The tie was then broken up by Renninger’s goal in the 70the before freshman Lauren Pyle tallied the first goal of her collegiate career to set the 3-1 final score.

Pyle gave credit to a cross from Claire Miko that helped her get in the scoring column.

“The goal felt good,” said Pyle, “but I couldn’t have done it without the pass from Claire. She got her head up and found me.”

SFU sophomore goaltender Sarah McConnon, recorded nine saves, allowing only a floating header in the box to get by her. The keeper made two diving saves in the 42nd and 71st minutes.

SFU evened its season mark at 2-2. After dropping its season-opening match to seventh-ranked Clemson before a setback at Duquesne, the Flash have won their last two contests and will travel to Pitt for a match on Sept. 9.