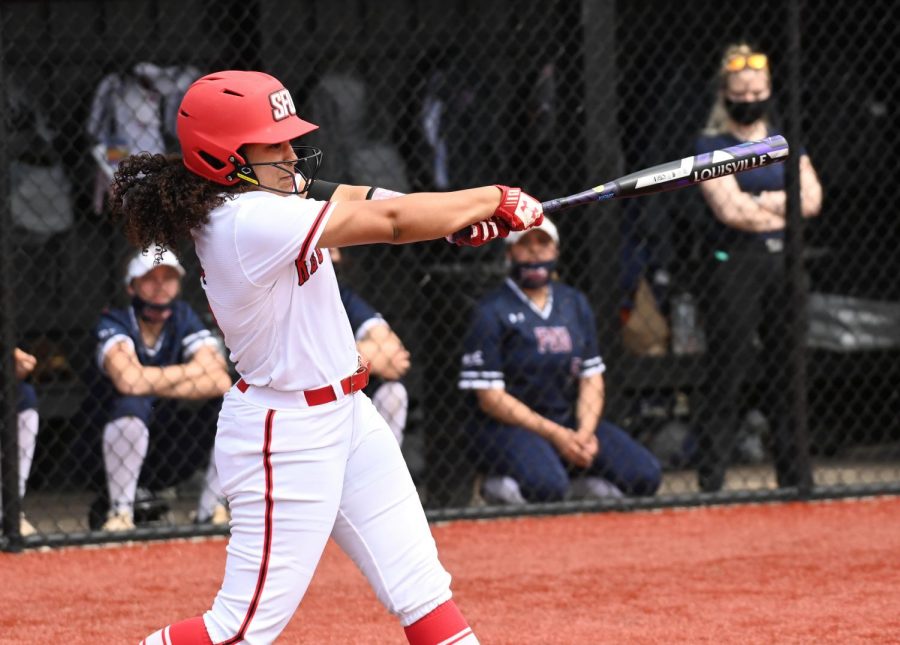 After winning three of four games at Mount Saint Mary’s earlier this week, the softball team sits atop the Northeast Conference with a 14-2 record in league play (29-8 overall).

While it has been an extremely balanced effort by multiple players that has propelled the Flash to the top of the NEC, several players’ performances have been particularly noteworthy through the middle of April.

One of those players is senior Tayven Rousseau. Following the four games at the Mount, the senior marketing major leads the Flash in home runs (6) and RBI (32). She stands fourth on the team in batting average (.293) and hits (29).

“Tayven always gives it her all when she’s on the field,” said her teammate Brittney Crawford.

“She pushes herself and all of us to be better every day. We all know we can count on her whenever we need her, whether that’s on or off the field.”

In addition to leading SFU in home runs, Rousseau is among the league leaders in this category as well.

“Our team chemistry is excellent, on and off the field, and I think that has helped us the most this season because we know how to pick each other up if one of us is struggling,” said Rousseau.

“We can’t take a single game off because they are all so important,” said Rousseau. “We need to treat every game like it’s the NEC championship.

“Since we are back-to-back champs, every team in the conference wants to beat us and will do anything they can to do that. “We just need to keep working hard at practice and everything will pay off.”

The softball team hosts Central Connecticut State this weekend for a pair of doubleheaders on Saturday and Sunday, April 17-18.