Volleyball to Host First Round of EIVA Playoffs 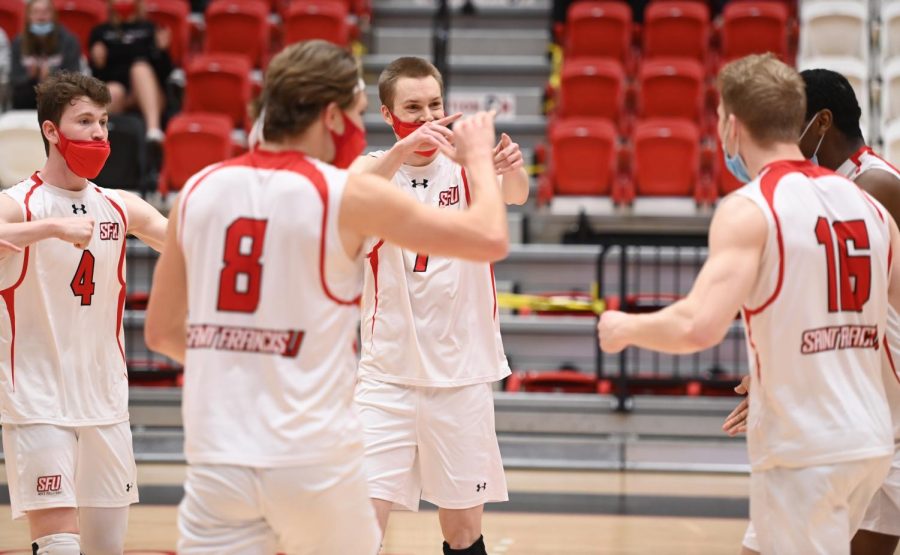 The men’s volleyball team will host Charleston in the first round of the Eastern Intercollegiate Volleyball Association Playoffs this Saturday, April 17, at 5 p.m.

The Flash swept a pair of matches at Sacred Heart last weekend. The two wins over the Pioneers secured Saturday’s home playoff game.

“Our guys knew that a home playoff game was on the line, and they played with a purpose,” said head coach Mike Rumbaugh.

“We played hard as a team, and every substitution elevated our level of play.”

The team has rallied around the mantra of being a “second-half team,” and this is certainly true of their season. SFU opened its 2021 schedule with a 1-14 record. Since the beginning of March, however, the team has posted a 6-4 mark.

“We are confident because we are playing our best ball right before the playoffs,” said senior setter Roman Szwabinsky. “We’ve finally hit our groove.”

In the last match of the regular season at Sacred Heart last Saturday, the Red Flash hit a season-best .358.

“I am so proud of the way our guys work to get better,” said senior opposite Joshua Blair. “It’s vital to our success.”

One of Rumbaugh’s points of emphasis with his players is that confidence can only come through hard work in the gym.

“We still have another level to go, but so many other teams have already given their best and peaked,” said outside hitter Michael Fisher.

Entering the postseason this weekend, the Red Flash believe they can beat anyone in the conference.

“It’s important to play with a chip on your shoulder,” said sophomore Matt Menosky. “It keeps you motivated.”