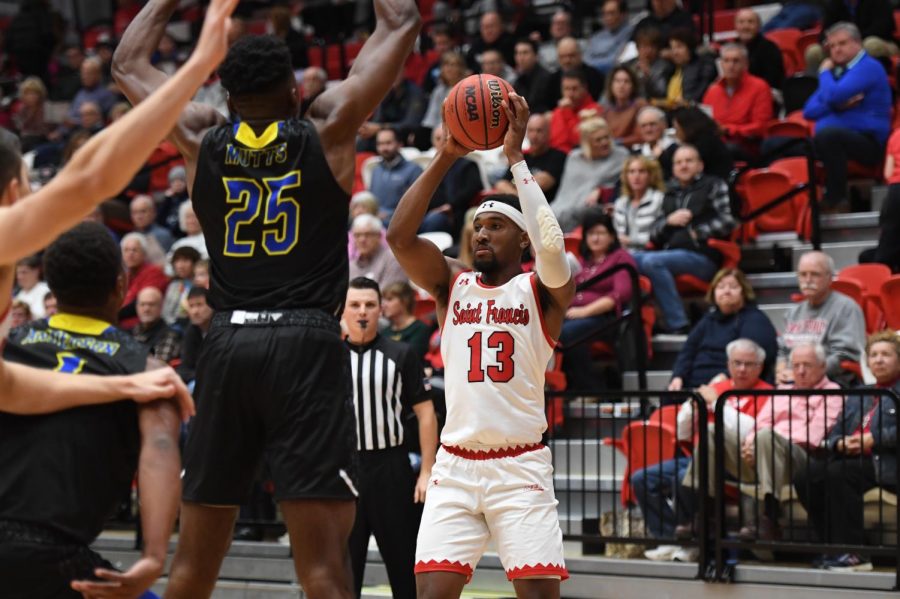 Delaware (6-0) defeated the men’s basketball team, 79-64, on Tuesday night at the Stokes Center to continue its six-game win streak to start the season.

Saint Francis (2-3) simply couldn’t get into a groove on offense on its home court, shooting 39 percent from the field for the game. Delaware, on the other hand, seemed as if it couldn’t miss much of the night. After an impressive showing in the first half, the Blue Hens came out in the second half and shot 62 percent from the field.

The Red Flash went on a run at the end of the first half to take a six-point lead with two minutes remaining, but quickly saw it disappear behind the sharpshooting of Delaware’s Nate Darling. The Blue Hens led at the half, 38-37.

For the past four years, Red Flash fans have been witness to Keith Braxton, one of the greatest players to ever play at the Stokes Center. However, most fans aren’t used to seeing the offense run through him. That’s because they had the pleasure of watching another of SFU’s all-time greats, Jamal King, during the last four years.

But with King gone, Krimmel and the Flash are learning what players should be in what roles this season.

At halftime, Krimmel said SFU had to try and find a way to slow down Darling, who was already sitting at 20 points going into the break. SFU did control him a bit more in the second half, limiting him to just eight points. However, the rest of the Delaware lineup came alive in the second half and it was just too much for the Red Flash to handle.

The game wasn’t necessarily a case of the Red Flash’s shots just not falling and the Blue Hens’ shots going down. It was more a case of defensive play and scheming. The Blue Hen’s majority of jumpers and perimeter shots were wide-open looks, as their swing offense often left players wide open to get a shot off before a Red Flash player was able to make it there.

On the other side, Delaware’s defense was stingy and contested almost every SFU shot. The UD defense limited the Red Flash to just 9 assists while also forcing 10 turnovers. UD scored 16 points off of those 10 SFU turnovers, while the Flash could only manage 3 points off of Delaware’s 10 turnovers.

Delaware did a tremendous job forcing the Red Flash to look for different scoring options throughout the night and neutralized Isaiah Blackmon. The fifth-year standout shot just 1-14 from the field and 0-8 from three-point range after scoring a career-high 28 points in SFU’s previous game against American.

Mark Flagg turned in a strong performance off the bench, contributing 13 points and 8 rebounds. SFU’s bench outscored the Blue Hen’s, 27-3.

Krimmel, who was looking for his 100th career win as head coach at SFU, was asked in the postgame press conference if this type of disappointing game could serve to jumpstart his team.

“We’ll find out,” said Krimmel. “I think early in the year you need to find out about your team.” The Red Flash travel to Tallahassee Saturday to face Florida State.